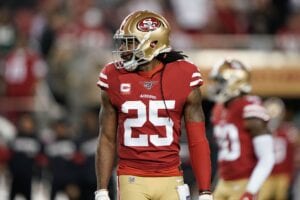 “I see Mr. Sherman is a pillar in this community, he’s a business owner, he’s a husband, he’s a father,” the judge said, per Amy Dash. “I’m gonna release Mr. Sherman.”

Sherman is facing one count of misdemeanor criminal trespass with a domestic violence designation, malicious mischief, DUI, resisting arrest and has another hearing on Friday, per Bob Condotta.

Sherman was released on conditions and he will have to return to court when requested. Beyond that, Sherman can’t use drugs or alcohol, can’t possess firearms and has a no-contact order with regard to his father-in-law, per Dash.

Sherman’s wife did not request a no-contact order against him.

Sherman was involved in a serious car accident and is suspected to have been under the influence.

An ESPN report has more details after obtaining audio of the 911 call appearing to be made by Sherman’s wife, Ashley Sherman. She described Sherman as being “drunk and belligerent” and added he was “threatening to kill himself.”

Ashley Sherman also told the 911 dispatcher that Sherman was “being aggressive,” wrestled with her uncle and “sent text messages to people saying he’s going to hang himself.” She can be heard trying to stop him from leaving the house and said Sherman had drunk two bottles of hard alcohol.

Ashley Sherman told the dispatcher to tell police not to shoot when they arrived and that Sherman had told her he would fight the police if they showed up.

Police also received 911 calls from the scene of the accident where Sherman wrecked his car in a construction zone and from his in-laws’ house in Redmond. Per ESPN, upon arriving at the house in Redmond, police tried to develop a rapport with Sherman, but the situation devolved when they told him they had probable cause to arrest him. He started walking away and the police released a dog to subdue him and complete the arrest.