According to Nick Underhill, the Saints are expected to designate TE Nick Vannett to return from injured reserve today. 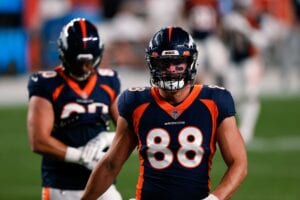 This opens a three-week window of time for the Saints to activate them from injured reserve and add him to their 53-man roster.

Vannett, 28, is a former third-round pick in the 2016 NFL Draft by the Seahawks out of Ohio State. He was in the final year of his four-year, $3,056,880 rookie contract when Seattle traded him to the Steelers a few years ago.

Vannett finished out his contract before agreeing to a two-year, $5.7 million contract with the Broncos last year. Denver released him back in March and he signed a three-year deal with the Saints.

In 2020, Vannett appeared in 15 games for the Broncos and caught 14 passes for 95 yards receiving and a touchdown.