Saints G Andrus Peat underwent surgery for a torn pectoral on Friday and will miss the remainder of the 2021 season. New Orleans is now placing Peat on injured reserve, according to Nick Underhill. 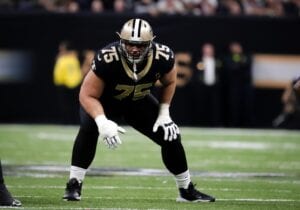 Reports had said that New Orleans feared this could be a serious injury for Peat.

The Saints are also activating DT David Onyemata from the exempt list which will give them back a key piece on their defensive line.

After playing out his option and becoming an unrestricted free agent, Peat signed back with the Saints on a five-year, $57.5 million deal in 2020.

In 2021, Peat has started seven games for the Saints at left guard and was rated by Pro Football Focus as the No. 64 guard out of 74 qualifying players.