According to Tom Pelissero, the Saints are promoting TE Garrett Griffin from the practice squad to their active roster. 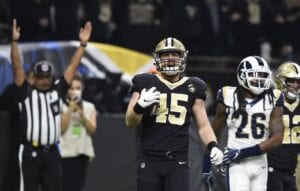 Griffin, 26, originally signed on with the Saints as an undrafted free agent out of Air Force back in 2016. He was waived coming out of the preseason his rookie year and re-signed to New Orleans’ practice squad.

He’s bounced on and off the Saints’ practice squad over the last three years.

For his career, Griffin has appeared in five games and recorded one reception for four yards.