Mike Triplett reports that the Saints plan to work out RB Darius Victor, who was the 2022 Offensive MVP in the USFL. 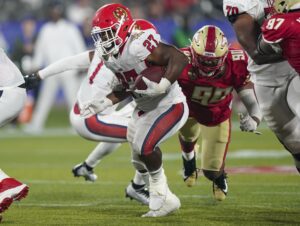 Victor, 28, was born in Ivory Coast and wound up going undrafted out of Towson back in 2017.

He later took part in the Jets and Saints’ minicamps but wasn’t signed to a contract afterward.

The Saints eventually signed him to a three-year, $1.66 million contract but he was among their final roster cuts just one month later.

Victor briefly joined the Cardinals practice squad and was signed to a futures deal before being waived.

In 2022 with the Generals, Victor racked up 577 rushing yards to go with a USFL-leading nine rushing touchdowns. He also had 113 receiving yards to go along with one touchdown reception.

We will have more news on Victor as it becomes available.