According to Ian Rapoport and Mike Garafolo, the Seahawks currently have no plans to trade QB Russell Wilson. 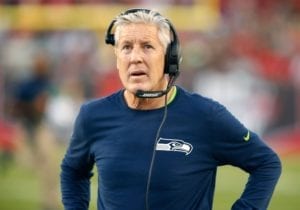 However, things are much more up in the air for HC Pete Carroll coming off of his first losing season since 2011. Carroll just signed an extension last year that runs through the 2025 season

Garafolo and Rapoport say if Carroll and owner Jody Allen, who are scheduled for their normal end-of-season meeting this week, are not on the same page about the future of the team, a mutual parting could be in order.

Carroll, 70, was hired as the Seahawks’ head coach back in 2010. Since taking the job, Carroll has led the team to a record of 118-73-1 to go along with eight playoff appearances, two trips to the Super Bowl and a championship in 2013.