Tom Pelissero reports that the Seahawks are releasing WR Paul Richardson on Saturday.

Richardson, 28, is a former second-round pick of the Seahawks back in 2014. He played out the final year of his four-year, $4,712,835 contract with the Seahawks before signing a five-year, $40 million deal with Washington.

Richardson was set to make base salaries of $6 million and $7.5 million over the next two years of the agreement when Washington released him back in February.

The Seahawks re-signed Richardson in August after bringing him in for a visit.

In 2019, Richardson appeared in 10 games for Washington and caught 28 passes for 245 yards receiving and touchdowns. Pro Football Focus had him rated as the No. 98 receiver out of 122 qualifying players. 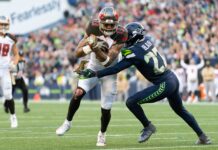 Seahawks DB Marquise Blair Out For Season With Torn ACL 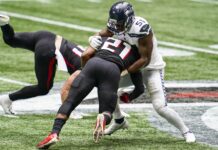 Seahawks OLB Bruce Irvin Out For Season With Torn ACL