The Seattle Seahawks have signed second-round RB Kenneth Walker to a four-year contract, according to the team website. 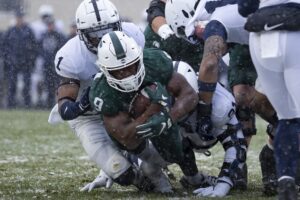 The team is also signing DE Boye Mafe and CB Coby Bryant to their rookie deals.

Walker, 21, earned several honors last season including the Walter Camp Award, and Doak Walker Award, was a Unanimous All-American, Ameche–Dayne Running Back of the Year, and was a first-team All-Big Ten selection. The Seahawks selected him with the No. 41 overall pick in the 2022 NFL Draft.

He elected to opt out of Michigan State’s bowl game and final collegiate game when declaring for the 2022 NFL Draft. Walker transferred to Michigan State last season from Wake Forest and had a huge year, even entering the Heisman conversation at one point.