A league source tells NFLTR that free agent QB James Morgan is working out for the 49ers on Friday. 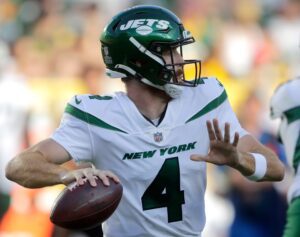 Morgan recently worked out for the Seahawks and Packers, so interest in him has picked up quite a bit in recent weeks.

Morgan, 25, was a two-year starter at Florida International after transferring from Bowling Green. The Jets selected him with the No. 125 pick in the fourth round in 2020.

Morgan was entering the second year of a four-year, $4,010,264 rookie contract that included a $715,264 signing bonus when the Jets waived him coming out of the preseason. From there, he had a brief stint on both the Panthers’ and Steelers’ practice squads before recently returning to the Jets for a week.

The Colts signed Morgan to their practice squad last season. He was brought back on a futures deal for 2022 but cut by the team in May.