Ian Rapoport reports that Steelers’ DT Tyson Alualu suffered a fractured right ankle during the first quarter of Week 2 against the Raiders and will undergo further testing on Monday. 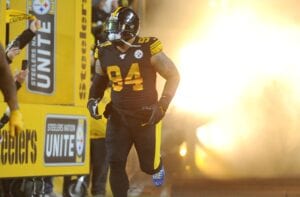 Alualu, 34, is a former first-round pick of the Jaguars back in 2010. He played out his rookie contract with the Jaguars before returning to the team on a two-year, $6 million contract in 2015.

He eventually departed Jacksonville in 2017 and agreed to a two-year, $6 million contract with the Steelers. Pittsburgh then re-signed him to another two-year deal.

In 2020, Alualu appeared in 15 games for the Steelers and recorded 17 tackles and two sacks.

We will have more news on Alualu as it becomes available.