Steelers’ LB T.J. Watt left the team’s Week 2 matchup with the Raiders due to a groin injury and was later downgraded to out, according to Brooke Pryor. 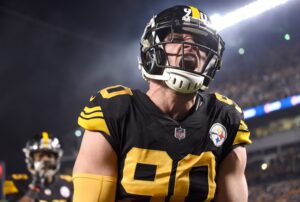 Pittsburgh exercised Watt’s fifth-year option last offseason for $10.089 million in 2021. He then signed a four-year extension worth over $112 million with the Steelers that included $80 million fully guaranteed at signing.

In 2020, Watt appeared in 15 games for the Steelers and recorded 53 tackles, 15 sacks, one interception, two forced fumbles, and seven pass defenses.

We will have more news on Watt as it becomes available.