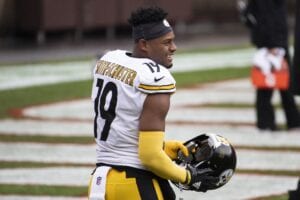 Smith-Schuster, 24, was a second-round pick by the Steelers out of USC in the 2017 NFL Draft. He just finished the final year of a four-year, $4.19 million rookie contract that included a $1.19 million signing bonus before re-joining the Steelers on a one-year, $8 million deal.

Smith-Schuster will, once again, be an unrestricted free agent next year.

In 2021, Smith-Schuster has appeared in five games for the Steelers and caught 15 passes for 129 yards (8.6 YPC) and no touchdowns.