The Houston Texans announced on Thursday that they are activating LB Kevin Pierre-Louis from the COVID-19 list and moving TE Jeff Driskel from the COVID list to injured reserve. 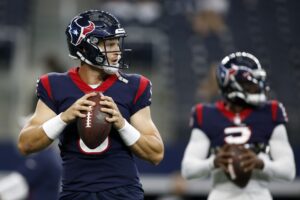 Pierre-Louis, 30, was originally a fourth-round pick by the Seahawks in the 2014 NFL Draft out of Boston College. The Chiefs later traded LB D.J. Alexander to the Seattle Seahawks in exchange for Pierre-Louis.

Washington brought Pierre-Louis in a one-year contract worth up to $3.45 million for the 2020 season. This offseason, he signed a two-year, $8 million deal with the Texans.

In 2021, Pierre-Louis appeared in eight games for the Texans and recorded 10 tackles and one fumble recovery.

Driskel, 28, is a former sixth-round pick of the 49ers back in 2016. He was waived by the 49ers at the start of the 2016 season and was later claimed off of waivers by the Bengals.

Houston cut Driskel coming out of the preseason but brought him back to the practice squad. He recently converted from a quarterback to a tight end while with the team.