According to Aaron Reiss, the Texans are not expected to trade either WR Brandin Cooks or LT Laremy Tunsil before the trade deadline on November 2. 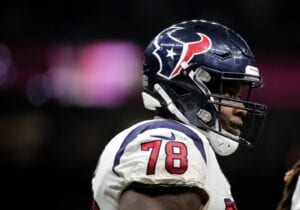 The two are arguably Houston’s best players right now and would draw interest if put on the block. However, Reiss points out their deals were restructured this offseason, meaning there’s less financial incentive to move them.

He adds both players are still in their 20s and could be productive contributors for the Texans beyond this year.

Reiss adds the Texans could also still trade QB Deshaun Watson, as momentum seems to be building for a deal. He adds Houston could move on from some other players like LB Zach Cunningham, DE Charles Omenihu or TE Jordan Akins in trades before next Tuesday.

Reports from the weekend indicated the Texans could be active sellers ahead of the deadline.

New England later picked up his fifth-year option for the 2018 season before trading him to the Rams for first- and sixth-round picks. From there, Cooks agreed to a five-year extension worth $81 million with Los Angeles only to be traded to the Texans last year.

Cooks is set to make base salaries of $2.5 million and $12.5 million over the next two seasons. His deal voids after the 2022 season, making him an unrestricted free agent in 2023.

In 2021, Cooks has appeared in seven games for the Texans and caught 45 of 64 targets for 502 yards receiving and one touchdown.

We’ll have more on the Texans ahead of the trade deadline as the news is available.