The Houston Texans signed QB Alex McGough to their practice squad on Monday, according to Eric Edholm. 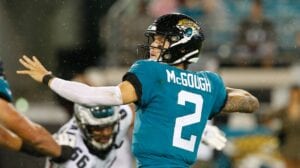 Last week, Aaron Wilson mentioned that McGough was expected to return to the Texans’ practice squad, so this isn’t a big surprise.

Houston once again waived McGough coming out of camp.