Aaron Wilson of the Houston Chronicle reports that the Texans have re-signed TE Pharaoh Brown to a one-year, $2.2 million deal. 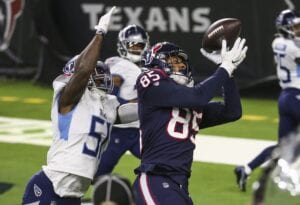 Brown, 26, wound up signing on with the Raiders as an undrafted free agent out of Oregon back in 2017. He was waived coming out of the preseason but was later signed to the Raiders’ practice squad.

The Raiders eventually promoted Brown to their active roster before once again releasing him at the start of the regular season. From there, he had a brief stint with the Browns before the Texans added him to their practice squad last season.

In 2020, Brown appeared in 13 games for the Texans and caught 14 passes for 163 yards receiving and two touchdowns.