According to Aaron Wilson, the Texans have restructured WR Brandin Cooks‘ contract. 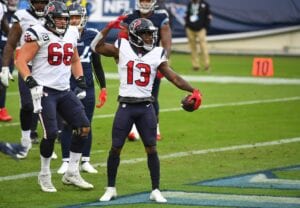 The team converted $831,111 of his base salary into a signing bonus to create $554,000 in cap space. Cooks was set to make a base salary of $2 million after signing an extension this offseason.

It’s not much but it could help the Texans manage their practice squad and injured players over the course of the season.

New England later picked up his fifth-year option for the 2018 season before trading him to the Rams for first- and sixth-round picks. From there, Cooks agreed to a five-year extension worth $81 million with Los Angeles only to be traded to the Texans.

Cooks was set to make a base salary of $12.5 million for the 2022 season when he agreed to a two-year, $39.6 million extension with Houston.

In 2022, Cooks has appeared in two games for the Texans and caught 11 passes on 22 targets for 136 yards receiving and no touchdowns.