According to Aaron Wilson, the Texans are working out CB E.J. Gaines on Tuesday.

Despite trading for CB Gareon Conley from the Raiders yesterday, Houston is still shorthanded at corner with three players hurt, with CB Phillip Gaines on injured reserve with an ankle injury.

Gaines, 27, is a former sixth-round pick of the Rams back in 2014. The Rams traded him to the Bills as part of the Sammy Watkins deal.

Gaines played out the final year of his four-year, $2,327,672 contract and made a base salary of $690,000 for the 2017 season before signing with the Browns for 2018. After one year in Cleveland, Gaines signed a one-year contract worth up to $3.6 million with the Bills this past March.

The Bills placed Gaines on injured reserve a few months ago before releasing him with a settlement in August.

In 2018, Gaines appeared in six games for the Browns and recorded 13 tackles, one interception and three pass defenses.

Rogers, 26, wound up signing on with the Steelers as an undrafted free agent out of Louisville back in 2015. He played out the final year of his three-year, $1,580,000 contract with the Steelers before returning to the team on a one-year contract last summer.

Rogers returned to the Steelers in March on a one-year contract but was released coming out of the preseason.

In 2018, Rogers appeared in three games for the Steelers and caught 12 passes for 79 yards receiving and no touchdowns. 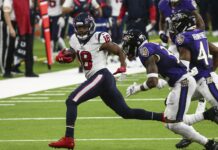 187,521FansLike
7,623FollowersFollow
275,724FollowersFollow
© NFLTradeRumors.co is an independent news source and has no affiliation with the National Football League (NFL), NFL.com, or any team(s).
wpDiscuz