Sanchez, 24, is a former fifth round of the Panthers back in 2016. He signed a four-year, $2.6 million contract with the Panthers but was waived coming out of the preseason and later signed to their practice squad.

The Panthers waived Sanchez with an injury settlement coming out of the preseason last year before later signing him to their practice squad back in October.

Sanchez returned to the Panthers this past January on a futures contract but was cut loose following this year’s draft.

In 2016, Sanchez appeared in five games and recorded nine tackle and no interceptions or pass defenses.

Williams, 30, originally signed on with the Cowboys as an undrafted free agent out of Texas-San Antonio back in 2010. He lasted just over two years in Dallas before he was waived at the start of the 2012 season.

Williams had had brief stints with the Colts, Cardinals, Bears and Jaguars before the Panthers signed him to a contract a few years ago. Carolina brought Williams back on a one-year, $855K contract last year but he wound up missing the entire 2017 season.

The Panthers waived Williams back in March and he later signed a one-year contract with the Giants. Williams recently asked for his release.

In 2016, Williams appeared in three games and recorded six tackles, one interception and two pass defenses. 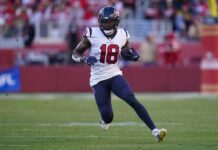