According to Ian Rapoport, free-agent TE Jordan Reed has three teams interested in him as the potential start to training camp draws near.

Rapoport confirms the former Washington tight end intends to try and continue his career in 2020 despite a long injury history.

The Seahawks hosted Reed for a visit back in March and could be one option. Seattle signed TE Greg Olsen at the beginning of the year but has injury questions with other tight ends on the roster.

Reed also received some interest from the Rams but after Los Angeles addressed the position in the draft it’s unclear how much interest the team still has in Reed.

Reed has dealt with a number of injuries since entering the NFL and sustained seven documented concussions over the course of six seasons. The final one ended his 2019 season before he could play a snap in the regular season.

However, multiple reports have indicated Reed still plans to resume his NFL career.

Reed was set to make base salaries of $8.25 million and $8.75 million over the next two years of the agreement when the Redskins released him earlier this offseason. 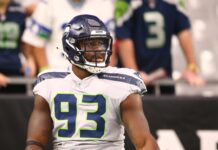 You stated THREE teams were interested, and only named TWO…WTF???