The Tennessee Titans announced Wednesday that they’ve ruled out RB DeMarco Murray for Saturday’s game against the Patriots.

This, of course, means that we’ll see even more of Derrick Henry this weekend.

Murray is reportedly dealing with a third-degree MCL tear and while Tennessee seemed optimistic that he could play through the injury, it’s clear that the injury is more serious than they were letting on.

Murray, 29, is a former third-round pick of the Cowboys back in 2011. He’s currently in the second year of his four-year, $25.5 million contract that included $12.5 million guaranteed and stands to make base salaries of $6.25 million over the next two years of the agreement.

Titans LT Taylor Lewan Out For The Season With Knee Injury 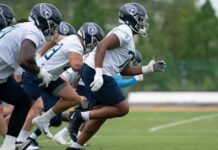