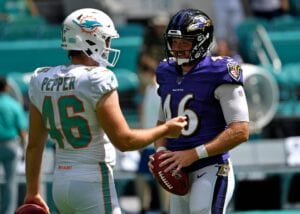 Cox has been a steady hand in Baltimore for years but the Ravens decided to move on this offseason to find a slightly cheaper option as they trimmed the margins of their books.

Cox, 34, signed with the Ravens as an undrafted free agent out of Tennessee in 2010. He re-signed as an exclusive rights free agent each of his first two seasons before inking a two-year extension in 2013.

Cox re-signed with the team in 2015 then signed a five-year, $5.6 million extension the following season.

In 2020, Cox appeared in all 16 games for the Ravens, recording one tackle.