The Tennessee Titans brought in free agent LB Will Compton for a tryout on Monday, according to Mike Jones. 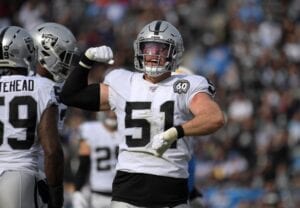 Compton, 30, signed on with Washington as an undrafted free agent out of Nebraska back in 2013. However, the team waived him shortly after and signed him to their practice squad once he cleared waivers.

Unfortunately, Compton was placed on injured reserve coming out of the preseason and eventually released with an injury settlement. He later caught one with the Raiders to finish out the season.

In 2019, Compton appeared in nine games for the Raiders and recorded 40 tackles and no sacks or interceptions.

186,511FansLike
7,623FollowersFollow
276,032FollowersFollow
© NFLTradeRumors.co is an independent news source and has no affiliation with the National Football League (NFL), NFL.com, or any team(s).
wpDiscuz