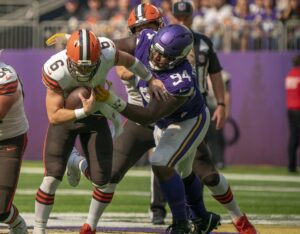 The Vikings signed Tomlinson to a two-year contract worth $22 million that included $20 million in total guarantees.

In 2021, Dalvin Tomlinson has appeared in 10 games for the Vikings and recorded 26 tackles, 1.5 sacks, a fumble recovery and a pass defleciton.