Adam Schefter of ESPN reports that Vikings RB Dalvin Cook will no longer participate in any team-related activities until he receives a “reasonable extension” from the team. 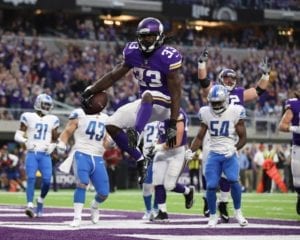 “He’s out,” a source tells Schefter. “Without a reasonable extension, he will not be showing up for camp or beyond.”

According to Schefter, the Vikings contract offers up to this point “demonstrate that they are a quarterback-first team.”

The Vikings signed QB Kirk Cousins to an extension worth $30 million per year.

Schefter says this is what Cook is hoping to earn over three seasons.

Meanwhile, Courtney Cronin hears that Cook is looking for north of the $16 million per year Christian McCaffrey is making in his record deal. Cronin says the Vikings do not want or can be in that ballpark.

Sources tell Cronin that Cook absolutely will not play for the Vikings in 2020 without a new deal.

Last month, Jeremy Fowler reported that the Vikings and Cook have had “productive” extension talks this offseason. Although, Fowler did say that nothing was close at the time.

Ian Rapoport of NFL Media mentioned that Cook’s next contract could end up being the biggest Vikings deal since Adrian Peterson signed a $100 million contract several years ago.