Adam Schefter of ESPN reports that despite the Vikings bringing in a number of kickers for workouts on Tuesday, they plan to stick with K Blair Walsh for now. 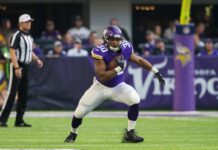 187,534FansLike
7,623FollowersFollow
275,777FollowersFollow
© NFLTradeRumors.co is an independent news source and has no affiliation with the National Football League (NFL), NFL.com, or any team(s).
wpDiscuz