Chris Tomasson reports that the Minnesota Vikings are bringing in QB Case Cookus for a workout on Monday. Ben Goessling also reports that the team will work out QB Jackson Erdmann for a second time this offseason. 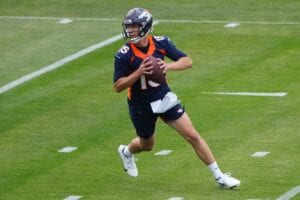 Cookus, 25, wound up going undrafted out of Northern Arizona last year. He later signed a rookie contract with the Giants.

However, New York waived Cookus during training camp and he sat out the 2020 season. The Broncos eventually signed him to a contract but he was later released in May.

During his college career at Northern Arizona, Cookus completed 62 percent of his passes for 12,082 yards, 105 touchdowns, and 21 interceptions over the course of 41 games and five seasons. He also rushed for 232 yards and six touchdowns.

Erdmann, 24, was undrafted out of Saint John’s University back in 2020 after transferring from Penn State. He made his professional debut in the Fan Controlled Football League.