According to Adam Schefter, Washington DE Montez Sweat has tested positive for COVID-19. 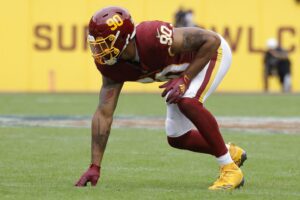 Sweat was supposed to make his return to practice today after being placed on injured reserve for a broken jaw.

Instead, this positive test will knock him out for the next 10 days and probably two games given he is unvaccinated. He’ll be eligible to return the day before Week 15’s game against the Eagles, but given he’s been out for a month already, it’s no sure thing he’ll be in condition to play.

Sweat, 25, is a former first-round pick of Washington back in 2019. He’s currently in the third year of his four-year rookie contract.

Washington has a fifth-year option to pick up on Sweat in 2023.

In 2021, Sweat has appeared in eight games for Washington and recorded 19 tackles, four sacks, and two forced fumbles.