According to Nicki Jhabvala, the Washington Football Team has designated WR Curtis Samuel to return from injured reserve. 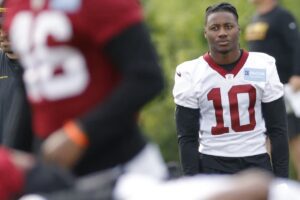 He’s missed the first three games of the season and the bulk of the summer with a groin injury but Jhabvala says he’s scheduled to practice on Wednesday.

Samuel has a 21-day window to practice with the team before they have to add him to the active roster.