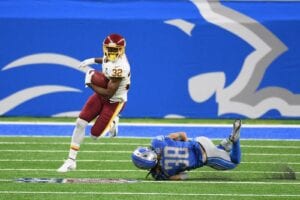 Johnson previously had not been tendered as a restricted free agent but this deal brings him back to Washington anyway, likely for less than the $2.133 million original round tender.

Johnson, 25, signed with Washington as an undrafted free agent out of Southern University in 2018. He’s made the team coming out of camp each of the past three seasons.

Johnson is set to be an unrestricted free agent in 2022.

In 2020, Johnson appeared in 14 games for Washington and recorded three total tackles, no interceptions and no pass defenses. He also added 573 kickoff return yards.