Field Yates reports that the 49ers are restructuring the contract of LT Trent Williams, converting $5.45 million of his base salary into a signing bonus in order to create $4.36 million in cap space. 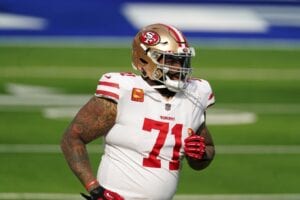 Williams, 34, is a former first-round pick of Washington back in 2010. He played out the final year of his five-year, $66 million contract that included $43.25 million guaranteed and made a base salary of $12.5 million for the 2020 season.

The 49ers later traded for Williams and signed him to a new deal.

In 2022, Williams has appeared in and started two games for the 49ers at left tackle.

49ers QB Jimmy Garoppolo Out For Season With Foot Fracture