Former Bills LB Lorenzo Alexander, who opted to retire this offseason, says he would be open to discussing a comeback with Buffalo should they be in playoff contention.

“I’m ready. I’m working. You never know. They make that run, call me up, Brandon [Beane],” Alexander said, via the Pat McAfee Show. 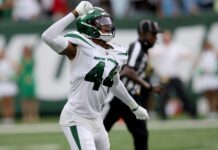