“Drew is more of a bullet-type thrower. He relies a lot more on his arm,” Jeudy said, via The Jim Rome Show. “Teddy, I feel he more anticipates and throws it and knows how to anticipate on your routes. That’s the only difference I see between them. But I feel like they’re two great quarterbacks who are out here competing. Having them compete against each other, you can see both of them are improving in their game.”

Chargers TE Jared Cook thinks they have a “high-powered” offense with its receivers Keenan Allen and Mike Williams, and feels they may have “better talent” than the Saints, his former team.

“When you have a high-powered offense and guys with the talent to make your offense high-powered, I think there are a lot of questions in the air about how well we will be,” Cook said, via Gilbert Manzano of the Southern California News Group. “That’s always going to be a question, but seeing the talent that we have at receiver, it’s just as good. We probably got better talent here than we had in New Orleans.”

Cook stood behind Allen and Williams, describing that they can line up in multiple positions in several packages.

“Just seeing those guys — Mike and Keenan — lining up all across the field in different formations, splitting us out in different packages, I definitely think that this offense has what it takes to become a high-powered, prolific offense in the NFL.”

Cook believes the Chargers have what it takes to score over 24-26 points per game and become known as a premier offense in the league.

“I think that we do have the ability to come out and put up what you want to be able to go out there and win games and compete in the league, because a lot of times when you’re not putting up close to that 24, 26 points, a lot of the time, you’re not going to be able to hang in there in those tight games in the fourth quarter,” Cook said. “So, I definitely think that we have what it takes to be that type of offense.”

Raiders’ HC Jon Gruden is happy that the team was able to select OL Alex Leatherwood in the first round of the draft for several different reasons.

“Well, he’s very smart, very athletic, he’s long,” Gruden said, via RaidersWire.com. “He’s a talented player, that’s why we took him. We had him ranked high on our board. We’re glad he fell to us. We were glad he was there for us. Smart guy, very athletic. He has a lot of experience. We’re counting on him being our starting right tackle.” 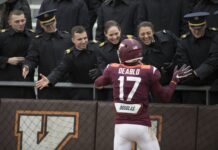