Titans QB Ryan Tannehill said their offense is embracing the challenge of building chemistry in a short amount of time after returning from the COVID-19 list. In addition to Tannehill, C Ben Jones and G Nate Davis returned from COVID-19, while WRs Julio Jones said and A.J. Brown are back from injuries.

“I welcome it,” Tannehill said, via Paul Skrbina of the Nashville Tennessean. “I love being in a position to draw our guys together, to push each and every guy to be the best he can be. Definitely a challenge but an exciting part of why I love to play the position.”

Titans HC Mike Vrabel said he’s “not ready” to announce whether Jones will be available for Week 1.

“I think we’ll see where that is. I’m not ready to commit to that, but until I find out otherwise I’m going to. We’ll see where everybody is on Sunday,” said Vrabel.

Tannehill is confident that Jones has a good understanding of the Titans’ system.

“He has a good ability to understand what’s going on,” Tannehill said. “Obviously you don’t understand that until you spend time, understand the concepts of what we’re trying to do, how defenses have tried to play him in the past and probably see again.”

Tannehill added that he’s only studied Jones on film and is excited to get started on building chemistry with him.

“I studied him on tape. His transition is a lot better than I thought a big guy of his stature (would be). Some of the routes he ran in Atlanta the past few years was a ton of fun to watch. I’m excited to keep working with him.” 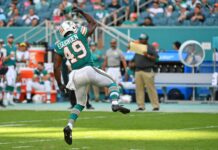