Colts DL DeForest Buckner compared playing last season without fans made games feel like a “scrimmage instead of an actual game.”

“Going to some places and not having any fans during the COVID year … it was insane,” Buckner said, via Jonathan X. Simmons of the Indianapolis Star. “Honestly I felt like sometimes it felt like it was a scrimmage instead of an actual game.”

Buckner is looking forward to playing the Titans twice a season in the AFC South.

“Going against (the Titans) twice a year is going to be a lot more fun,” Buckner said. “The bigger the challenge, the more interesting the game gets and I love it. I love going against the best and, you know, to be the best you’ve gotta beat the best and they’re one of the best teams in the league right now.”

As for the Colts being set to play the 49ers and NFC West teams in 2021, Buckner said he’s excited to play his former team and his old division.

“I’m definitely gonna be excited,” Buckner said. “Especially this year, being able to face some teams in my old division and also obviously facing my former team, it’s gonna be exciting.”

Regarding Colts’ new QB Carson Wentz, Buckner said the quarterback is showing a clear presence of leadership around the locker room.

“Carson’s a great guy on and off the field. I can see the leader that he is. He definitely is a leader of men,” Buckner said. “I can’t wait to see what he does this year. Being able to have a fresh start, that’s what I think he just needed. He needed to get out of Philly and get a fresh start. I mean he’s got a great o-line in front of him to keep him upright and he’s got a lot of weapons on offense to dish the ball to. It’s gonna be really fun to see him comeback this year.”

Mark Long of the Associated Press reports that the Jaguars were fined due to excessive contact between receivers and defensive backs during team drills this offseason. They released the following statement on the fines that were issued:

“We’ve been informed of the fines issued by the league and will accept the NFL discipline as it pertains to a contact violation during practice on June 1. The Jaguars are vigilant about practicing within the CBA rules and will re-emphasize offseason training rules as they relate to contact. We are looking forward to the start of training camp later this month.”

Falcons’ HC Arthur Smith knows that he will have to innovate offensively in Atlanta, as he will be unable to lean on the phenomenal running skills of Derrick Henry who he leaves behind in Tennessee.

“And really Derrick, it was a practicality,” Smith told Cris Collinsworth on his podcast. “Derrick is the outlier. The number of carries he had, and when he gets going, it’s impressive to watch.” 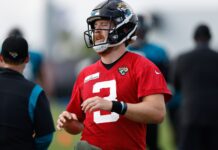