According to KXII News in Sherman, Texas, Bears WR David Moore was arrested on Monday. 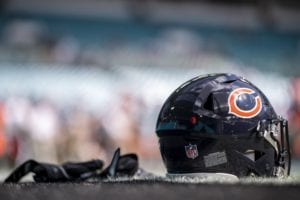 He was booked with drug and weapon charges after being arrested in his hometown of Gainesville, Texas. He posted a $5,000 bond and was released the same day.

TMZ has more details, reporting Moore fell asleep in his car in a Taco Bell drive-through. Police claim Moore smelled of marijuana when they questioned him and they found “a package of THC edible candies along with three pistols” in his car.

Moore was arrested for possession of a controlled substance and unlawful carrying of weapons.

Moore, 26, is a former seventh-round pick out of East Central by the Seahawks in 2017. He signed a four-year, $2.48 million rookie contract but was waived as they trimmed their roster down to the 53-man limit.

Moore was promoted to the Seahawks’ active roster later in 2017 and returned to Seattle on a one-year deal as an exclusive rights free agent in 2019. He was testing the market as an unrestricted free agent when he signed a two-year, $4.75 million deal with the Panthers.

Moore caught on with the Bears this offseason on a one-year deal for the 2022 season.