According to Kelsey Conway, Bengals DE Wyatt Hubert has decided to retire, with the team placing him on the reserve/retired list. 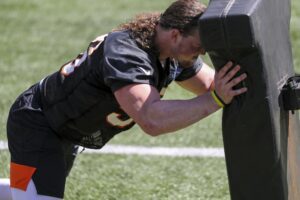 Hubert, 24, was drafted in the seventh round of this year’s draft out of Kansas State by the Bengals. He was a first-team All-Big 12 selection each of his final two years at Kansas State.

Hubert signed a four-year, $3.6 million rookie contract but later missed the 2021 season with a torn pectoral. He never appeared in an NFL game or recorded any statistics.