Tyler Dragon reports that the Bengals will likely use the franchise tag on S Jessie Bates and attempt to continue negotiations on a long-term deal. 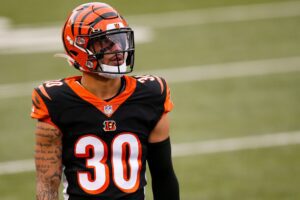 Bates has made it clear that he would prefer a long-term extension over the franchise tag this offseason. He also wants to return to the Bengals, while still becoming the highest-paid safety in the NFL.

The Bengals and Bates were reportedly hoping to get an extension done before last season, but talks eventually broke down.

The franchise tag is projected to cost teams around $13.5 million for the safety position this offseason.

Bates will be an unrestricted free agent this offseason.

In 2021, bates appeared in 15 games for the Bengals and recorded 88 tackles, one interception, a fumble recovery, and four pass deflections.