Adam Schefter reports that the Bengals have reached an agreement to sign DE Sam Hubbard to a four-year, $40 million extension. 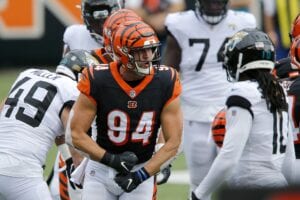 Schefter points out that extending Hubbard’s contract was an important move for the Bengals’ defense.

In 2020, Hubbard appeared in 13 games for the Bengals and recorded 33 total tackles, one forced fumble, and two sacks.