According to Ian Rapoport and Mike Garafolo, Bills TE Dawson Knox had surgery on his broken hand sustained Monday night against the Titans. 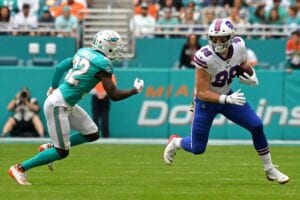 Garafolo says Knox is expected to miss a few weeks with the injury. Buffalo thankfully has its bye this week, meaning Knox might only miss a couple of games.

In 2021, Knox has appeared in six games for the Bills and caught 21 of 27 targets for 286 yards receiving and five touchdowns.