The Broncos announced that they have placed WR Tim Patrick and RB Damarea Crockett on the injured reserve list, as both will miss the season due to severe knee injuries. 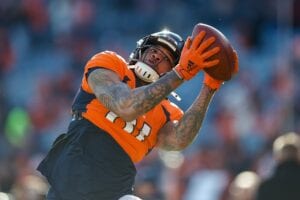 Patrick, 28, wound up signing a three-year, $1.66 million contract with the Ravens as an undrafted free agent out of Utah back in 2017. He was waived by Baltimore a few months later and claimed off of waivers by the 49ers.

San Francisco waived Patrick coming out of the preseason and he caught on with the Broncos soon after. He returned to Denver on an exclusive rights contract before the Broncos used a second-round tender on him worth around $3.384 million for the 2021 season.

Patrick was in line to be an unrestricted free agent in 2022 when he agreed to a three-year contract worth up to $34.5 million with the Broncos.

In 2021, Patrick appeared in 16 games for the Broncos and caught 53 passes on 85 targets for 734 yards receiving and five touchdowns.