Mary Kay Cabot of Cleveland.com reports that the Browns have no plans to cut QB Baker Mayfield, even if he remains on the roster during training camp. 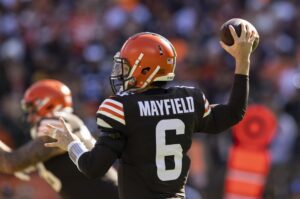 Cabot also reports that the Seahawks would be interested in signing Mayfield if he is still cut and that the Panthers are yet to completely rule him out of their plans.

Mayfield did not show up to voluntary OTAs and is still hoping to facilitate a trade out of Cleveland, yet no teams appear to be interested in working out a deal at this time.

If he decides to skip the mandatory minicamp, he could forfeit around $95,000 for the three-day period.