The Cleveland Browns have begun trimming their roster down to 53 players ahead of Tuesday’s deadline. 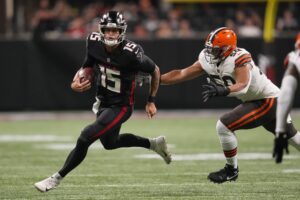 The full list of roster cuts for the Browns includes:

He is the first of Cleveland’s cuts in the process of trimming the roster to 53 players.

Weaver, 22, is a former fifth-round pick by the Dolphin out of Boise State in the 2020 NFL Draft.

Weaver signed a four-year, $3,602,992 contract with the Dolphins that includes a $307,992 signing bonus but was waived with an injury designation last year.

Cleveland claimed him off of waivers in August of last year but eventually landed on the injured reserve with a broken leg.

Wilson, 22, wound up going undrafted out of Florida State back in April. He later signed a rookie contract with the Browns.

Wilson was a three-year starter at Florida State and a Second Team All-ACC as a senior.

During his four-year career at Florida State, Wilson totaled 109 tackles, 15 tackles-for-loss, 9.5 sacks, two forced fumbles, a recovery, and five pass deflections over the course of 34 games.