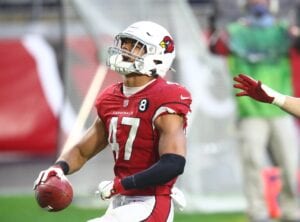 Turner, 25, went undrafted out of Washington back in 2018 before catching on with Arizona and playing in all 16 games as a rookie.

Tuner played out the final year of his rookie contract before agreeing to a one-year restricted deal with Arizona last year worth $2.183 million for the 2021 season.  He will be an unrestricted free agent this offseason.

In 2021, Turner appeared in five games for the Cardinals and recorded three tackles.

The Cardinals signed him, once again, and he’s been on and off of their practice squad.

In 2021, Kerr appeared in four games for the 49ers and three with the Cardinals, recording six tackles and none for a loss.