According to Cameron Wolfe, prosecutors have dropped all charges against former Giants CB Deandre Baker. 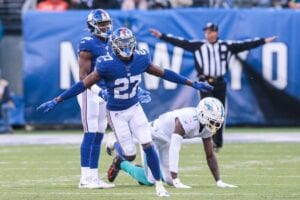 Baker was facing four counts of armed robbery following an alleged incident that involved him and Seahawks CB Quinton Dunbar.

However, Broward County arrested the lawyer for three of Baker’s four alleged victims and are charging him with extortion per Pat Leonard, another twist in a strange story full of them.

The Giants waived Baker earlier in the season after he was placed on the commissioner’s exempt list and no end to the case appeared to be in sight.

While Baker will avoid any jail time or repercussions, it’s unclear if he still has a future in the NFL given how unsavory the entire situation is and how poorly he played as a rookie. Then again, there always seem to be teams willing to give former first-round corners a chance, so Baker could still turn his career around.

The contract included a fifth-year option for the Giants to pick up for the 2023 season.