The Chiefs have officially elevated WR Daurice Fountain from their practice squad to the active roster for the AFC Championship game against the Bengals. 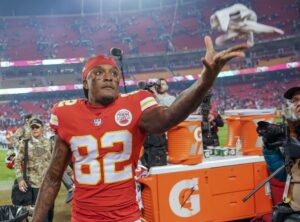 Indianapolis then re-signed Fountain to an exclusive rights free-agent deal in 2020. Fountain spent the season bouncing between the Colts practice squad and active roster.

In 2021, Fountain played in six games for the Colts, recording two catches for 23 yards.