According to Joel Erickson, the Colts are bringing in five players for workouts this week including OLB Derick Roberson and DE Bryan Cox Jr. 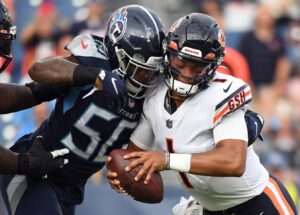 Roberson, 26, wound up going undrafted out of Sam Houston State back in 2019. He later signed a three-year, $1.755 million contract with the Titans, but was waived coming out of the preseason and returned to their practice squad.

Tennessee promoted him to the active roster in 2019 and was able to crack the active roster over the next two years. The Titans declined to tender him a contract back in March, making him an unrestricted free agent.

In 2021, Roberson appeared in five games and recorded 10 tackles, three tackles for loss, and 1.5 sacks.

Cox, 27, wound up signing on with the Panthers as an undrafted free agent out of Florida back in 2017. He was waived coming out of the preseason but was later added to their practice squad before eventually promoted to the Panthers’ active roster.

Cox managed to make the 53-man roster in 2018 and re-signed as an exclusive rights free agent. He ended up bouncing on and off the Panthers’ active roster and practice squad before the Browns signed him in 2019.

He signed a one-year deal with the Bills in 2020 but was among their final roster cuts and re-signed to the practice squad. Buffalo signed him to a futures deal in January of last year and has been testing the market as an unrestricted free agent.

For his career, Cox has appeared in 26 games and recorded 30 tackles, five tackles for loss, 0.5 sack, and a fumble recovery.