Michael Gehlken reports that tests on Monday confirmed that Cowboys LB Jabril Cox will miss the remainder of the 2021 season with a right ACL tear.

Todd Archer of ESPN reports that the Cowboys fear LB Jabril Cox suffered a torn ACL in the second half of Sunday’s win over the Vikings. 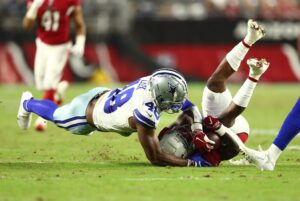 Should further tests confirm that Cox did, in fact, suffer a torn ACL, he would miss the remainder of the 2021 season.

Cox, 23, was a three-year starter at North Dakota State before transferring to LSU. The Cowboys selected him in the fourth round of the 2021 draft.

In 2021, Cox appeared in seven games for the Cowboys and recorded two tackles and no sacks.