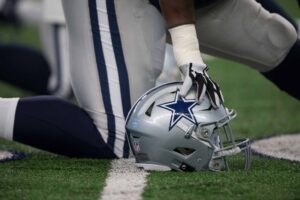 He will need surgery and will miss the 2022 season.

Bond, 28, is a former sixth-round pick by the Buccaneers in the 2016 NFL Draft out of Oklahoma. He was entering the third year of his four-year, $2.48 million rookie contract when Tampa Bay waived him with an injury settlement in 2018.

However, the Buccaneers re-signed Bond after he was fully recovered from plantar fasciitis. He was in line to be a restricted free agent in 2019 before re-signing on a one-year deal with Tampa Bay.

The Buccaneers released Bond and he caught on with the Bears for the final three games of 2019. Chicago brought him back on a one-year deal in 2020 and bounced on and off their practice squad during the season before being released at the end of the year.

The Cowboys signed Bond to their practice squad late in 2021 and brought him back on a futures deal for the 2022 season.

For his career, Bond has appeared in 34 games for the Buccaneers and Bears and has recorded 26 career tackles.