Cowboys QB Dak Prescott told reporters he expects to be starting for Dallas in Week 7 against the Lions, per Michael Gehlken. 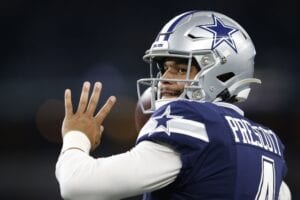 This has been the plan since early in the week, and Prescott has been practicing with no setbacks.

Prescott initially had a six to eight-week timeline after breaking his thumb and having surgery following Week 1.

Prescott, 29, is a former fourth-round pick of the Cowboys back in 2016. He played out the final year of his four-year, $2.72 million contract and was in line to be an unrestricted free agent in 2020 when Dallas placed the franchise tag on him.

The following offseason, Prescott signed a four-year, $160 million contract that included a record $126 million guaranteed. The contract can top out at $164 million.